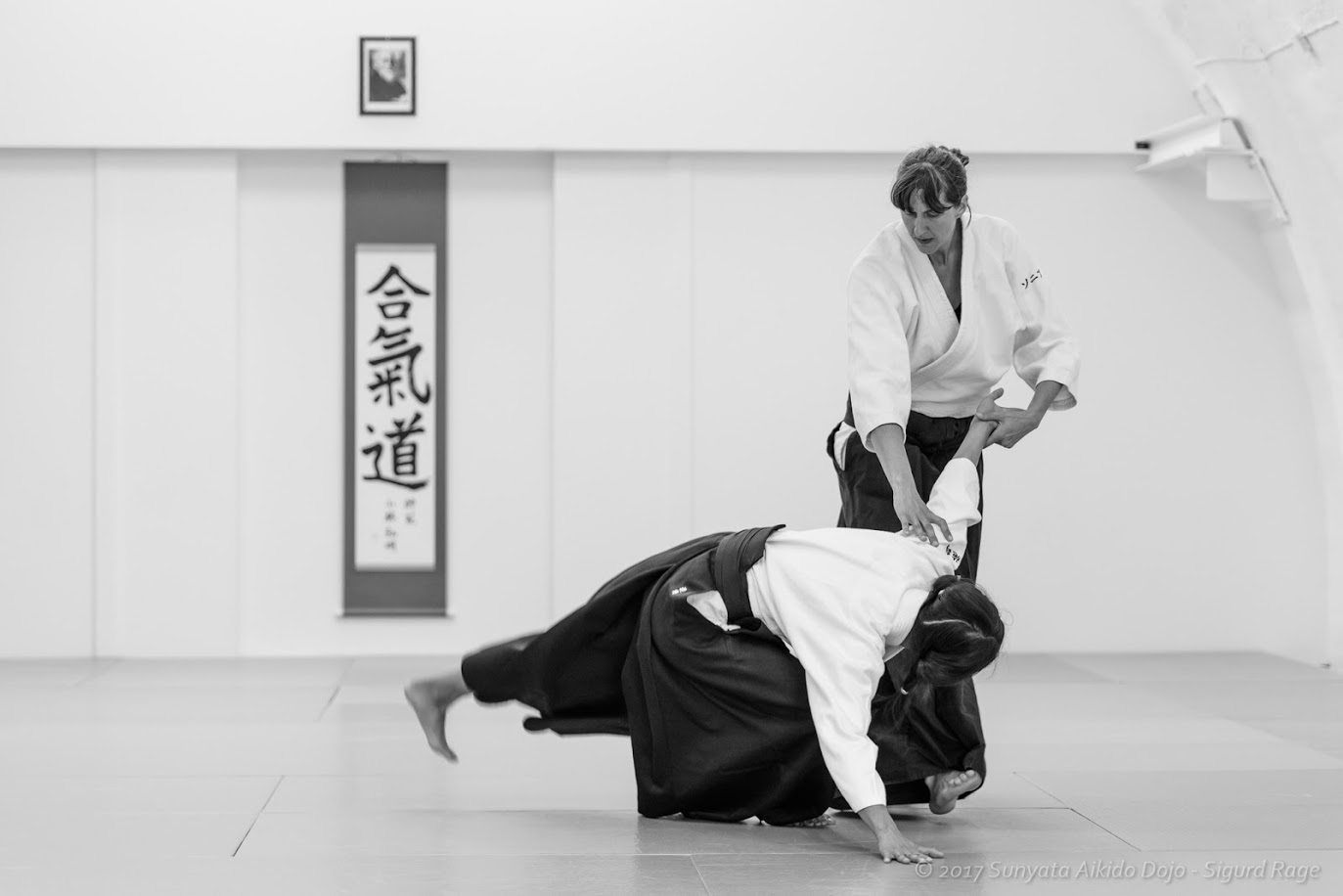 At one of my last Aikido in Business leadership seminars I did a brief demonstration of what aikido looks like when it is done by advanced practitioners with experience under their (black) belts. On that occasion I had my husband with me (who is – like me – a fourth degree black belt), helping out as my assistant. Together we demonstrated a couple of knife disarming techniques as well as some basic empty-hands techniques without weapons. After watching us perform, some of the participants of the seminar came up with some good questions which inspired me to look more deeply into the topic of cooperation.

This is an interesting statement and if we look at where it comes from instead of feeling insulted by it, we can find out something very important about this martial art.

What most expect to see when watching a martial art is something more along the lines of a fight. A win-or-lose situation with the question of who ends up being the superior one and who gets beaten. This is what life has taught us. Conflict implies that we are fighting over who gets to be right, stronger or on top. It´s not pretty and it definately involves competition, right?

However, when we watch two advanced aikido practitioners practicing their art, the picture is a very different one. Unfortunately I forgot which aikido teacher said this, but here is one of my favourite aikido quotes:

„If it doesn´t look a little bit fake, it´s not good aikido.“

I couldn´t agree more. But why does it look like that? And if that is true, does that mean that aikido is not effective as a martial art? The latter is a question I will come back to in a future blog article, but let me elaborate a little on the first.

Aikido was developed by a Japanese martial artist who was famous for his skills and had studied different martial arts for decades before he realized that what mankind doesn´t need is another way of inflicting pain or a new method of domination. After have seen two world wars he wanted to go the opposite way and develop a martial art which „is not self-defense, but a way to reconcile mankind“. This may sound rather philospohical and indealistic, but it boils down to something very simple. We as humans know quite well how to cause trouble. We „know“ how to make things difficult for each other. It´s so much easier to make a mess of things than to create peace. Arguing and fighting unfortunately comes easy to us (even though most of us generally don´t really like it and would rather avoid it). Cooperation, however, does not. If that was not true, we would all be leading lives full of healthy relationships in our families and at the workplace. But that´s not the reality. Cooperating with each other, building and keeping healthy relationships is extremely complex and difficult. In our private lives as well as in the work environment. And not just when we deal with people who are „difficult“, but even with the people we deeply care about.

Like with everything we want to learn and that isn´t easy, we need to practice it. Do you remember learning how to drive a car? Now, did you learn it in a Porsche 911 on a Formula 1 racing course? Of course not. You first practiced it in a risk free environment with somebody at your side who helped you understand the process. That way you gained confidence and experience so you later on managed to carry out the same task in a more difficult environment.

It is the same with aikido. It´s a very complex art and we need to first support each other in understanding all that is contained in every single form that we learn, before we can become free and apply the principles in more difficult settings. But it goes even deeper than that.

Two sides of the same coin

Aikido is maybe the only martial art which – maybe depending a little on the style of aikido – spends a lot of time on studying the role of the attacker. Not only so we can learn proper strikes and a safe way of rolling out of throws. But we actually try to find the exact same principles that we find in the side of the defender in the side of the attacker in order to get a full picture of both sides of the coin. We study good posture, a safe distance, a good position towards our partner, and many other aspects.

This helps us find the inner rules of conflict, or maybe guidelines, which lead to a better outcome if both sides understand and follow them. If we carry this into „real life“, you can imagine a conflict in which both sides really give their all to try and resolve a conflict together by using and committting to these guidelines, in order to find the best possible outcome.

So, back to what aikido looks and feels like when it is done by people on a high level. It looks like dancing and it seems like two people are making things way too easy for each other. But in reality, what they are doing is extremely complex, and visible conflict resolution in its highest form. It shows the potential of what becomes possible if two opposing parties have understood the nature of conflict and its resolution and truly want to commit to cooperation. And it shows what can happen when conflict gets resolved in a way that leaves both sides unharmed and even offers the chance of a solution that allows both sides to grow – individually and together. It´s an art. And if it is done well, it is beautiful. Both in the movement as in the meta-level which is hidden inside it.

It looks so easy. And yet it is so difficult, that – like with any martial art – it takes many years of diligent practice to achieve mastery.
Will it work? Even with a counterpart who is not well-disposed towards me and does not offer to commit to the same idea? To be completely honest, probably not always. At least not in the beginning. But the more we practice it the more we will be able to help others get into the same mind set. The reward will be conflicts which instead of leaving you feeling empty and drained, will make you feel positive and more mature.

It´s definately worth it.